Under the hood: Massive IoT scales up data infrastructure By the end of this month, UnaBiz expects to complete the deployment 850,000 units of Space Hotaru as it winds down the first phase of the NICIGAS smart meter project.

Once installed, the two-way exchange of data between the IoT-based reader and the NICIGAS systems automatically begins. And the real work around big data gives the Japanese utility company a first-hand knowledge on the demand this steady stream of voluminous information has on its IT infrastructure.

“Previously, it was manual reading, there was no continuous stream of data going into the system. There was zero meters sending data to NICIGAS IT system. They had to scale the entry point of the system, because now there is a hundred of thousands of gas meters reporting in the data. And on that aspect, you have to add resources on the IT side of things,” said Philippe Chiu, co-founder and CTO of UnaBiz. 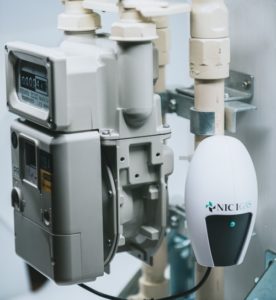 There is immense pressure on the enterprise network once it begins integrating IoT at scale. Chiu compares it to an “attempt of denial of service where hundreds of thousands of devices are hijacking and trying  to attacking the same target”.

“Massive IoT it is a bit like controlled denial of service because you do have those hundreds of thousands of new devices that have to report to your system, and you have to find a secure and stable way to welcome them, otherwise, the data cannot enter. This is just the network side of things,” Chiu explained.

To ease the IoT integration with NICIGAS’ IT systems, UnaBiz and the other partners worked on standardisation that simplifies the management of the devices and wireless networks.

“It is better to make that life easy so NICIGAS can deal with their internal challenges – rather than having the whole set of challenges, which is a huge mountain to climb,” Chiu said

From churning out one meter value once per month, the NICIGAS meters deliver several data points “every hour every single day of the year” according to Chiu.

“There is also a strain on the storage side of things, as previously one meter had one data point for every month. Just last year, we had 1.2 billion data points. What will happen in 2021? That is where the CIO of NICIGAS will have to scale its storage, computing capability. The point I'm trying to make is now we can talk about big data,” he said.

All the data collected from the smart meters are helping NICIGAS to augment and improve services delivered to customers.

“Just for the sake of security or their peace of mind, customers could just take the app, switch down, turn off the gas meter just remotely, with a fraction of the cost. This is really what is game-changing because this existed before NICIGAS had Space Hotaru, but the cost was between 5-10 times higher than the current solution,” Chiu said, adding “If the cost is so high, the consumers have some difficulty accepting the pricing. Thus, cost is an extreme and critical factor in the project. It is happening massively as  really drive the costs down”.

Meanwhile, Chiu said NICIGAS has been made a practice of anonymising gas consumption data and sharing them to the community.

“They have also organised contests with independent developers, among others, regarding prediction models. This  makes sense, because even if you are very qualified, what we're talking about is innovation. They are looking for new and  different angles of analysing the data and expecting that to happen in-house is narrowing the dream,” Chiu said.

He added the demand to ensure the big data present an accurate picture is one of the major factors for the fast deployment of Space Hotaru units.

“The more meters are connected, the more the data set makes sense,” he said.

To date, the Space Hotaru churn rate – the number of devices failing out – is extremely low. And UnaBiz is seeing huge growth in the meters’ live and historical data.

“We have extremely precise dashboard. We are monitoring battery levels, network capacity, hourly reports of the meter, which is volumetric,” Chiu noted. “It's a very interesting because some are increasing, which means that [customers are staying longer inside] the household. Those dashboard are shared with SORACOM and NICIGAS to assist them in the diagnosis. It is really about getting into the maturity of managing such large fleet of device.”

Again, Chiu pointed out the close partnership between NICIGAS, SORACOM and UnaBiz goes all the way down to data sharing.

“It's a one- of-a-kind project in terms of size. I respect data specialists, but I don't believe they have experience in actually dealing with such volume, in terms of actual devices plus their data points. And that's why we're extremely close with SORACOM and NICIGAS because of how things are going, there is no reference in the market,” he explained.

Every abnormal behaviours captured by the devices are analysed and diagnosed.

“Sometimes, we even discovered cables between the readers and the meters are slightly severed in the middle where you can't see it. We had to tear down the plastic wrapping of the cable, observe the copper and realise that the copper has some issues. That’s the daily life of the project managers of the Space Hotaru,” Chiu said.

Indeed, with its experience on massive IoT projects such as the one with NICIGAS, a key learning for UnaBiz is to look beyond the software capabilities of partners, which should already be a given for companies working at this level.

“When  we have to set up that circle of partnership, we no longer evaluate software not because software is not important. But the same way you take a brilliant guy who graduated from Stanford, and you don't test him with math,  you've just expected  him to know math. However, we try partners and collaborators on other scale, such as how would they behave in managing chaos. From supply chain to integration, there are simply too many moving parts [in a massive IoT project].”

Looking forward to the next 12 months, UnaBiz sees unprecedented rise in data volume following massive IoT deployments. With this, the company expects the redefinition of what big data means and signifies.

“Big data is not about clicks – not   about people watching videos; it’s not just about audience. Big data is either poor static data versus live data, audience on videos, how many people click, etc. So, it's kind of measuring the intense, but this is not the real data.

“You have physical limited data versus a huge data set that is not very reliable – and that has been big data for the past 10 years. I think as massive IoT happens with high-quality actual physical data,  it will challenge the existing data models that are based on very poor data.  I think this is going to be a trend in the next 12 to 24 months,” Chiu said.

He foresees the failure of the current data approach as development is hampered to a slowdown by the lack of good quality data.

“We call it IoT, but what is happening in reality is just data extraction. So, we have more accurate data, more volume of data and what do we do with then,  I think we'd be back into a data time where we try to leverage existing algorithms, figure out they're not actually feeding that type of volume, or we figure out the data are wrong,” he explained.

The emergence of massive IoT and the high-volume data with better accuracy will bring forth a whole new set of services, according to Chiu.

“Massive IoT is the entry door to have big data being useful to common people. That is how I see IoT. Of course, we always have those little projects with researchers that will be able to solve something – but, I don’t see them contributing to massive IoT to change people’s lives,” Chiu said.

Under the hood: Supply chain essential to massive IoT projects

Under the hood: Integration and device customisation in IoT projects