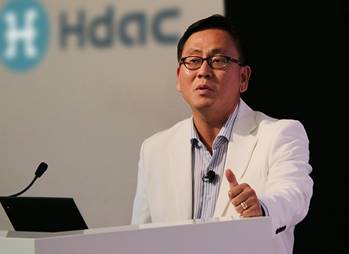 Hdac, an IoT contract platform based on blockchain, has unveiled an enterprise solution combining blockchain and the Internet of Things (IoT) at the IoT Blockchain Summit 2018 in Atlanta.

John Sang-ug Bae, Chief Operating Officer of Hdac Technology, said in his keynote speech at the conference that the company has developed the blueprint and key technologies of blockchain-as-a-service (BaaS) platform for enterprises, which marries the strengths of IoT with blockchain.

“We are now accelerating the development of ready-to-deploy business and industry applications,” he said.

Bae explained that current IoT services have distinct platforms and architectures, which makes it difficult to control heterogeneous devices or build them into a blockchain network.

“This compatibility issue has served as a big obstacle to commercializing the IoT and implementing a blockchain convergence model,” he said.

To address this challenge, Hdac has adopted the concept of an abstract blockchain layer and developed the Hdac Universal Multitenancy Blockchain Adapter (H-UMBA), an IoT platform architecture designed to manage and broadcast control information between heterogeneous IoT devices to their desired blockchain transactions.

Hdac said it plans to offer an adapter package that supports multiple IoT platforms and blockchains and to lead the commercialization and propagation of blockchain-based IoT services.

The company has already filed a patent application for H-UMBA in Korea and is in the process of doing the same in key countries, including the US, the UK, and Germany.

“We will continue to facilitate the growth of blockchain and IoT technology communities through our open source and open-API policies,” Bae said.