Photo by Clem Onojeghuo from Pexels

Companies from a wide variety of industries remain optimistic about the Internet of Things (IoT), despite the fact that its benefits haven’t materialized as quickly as anticipated. While excitement over connected devices is more measured than it was around 2013, the technology is maturing and firms are getting significant results from IoT investments.

Gartner predicts there will be more than 20 billion connected devices by 2020 and more than 65% of enterprises will adopt IoT products.

In the Economist Intelligence Unit’s Internet of Things Business Index 2017, 825 senior business leaders from around the world weighed in on the impact of IoT ontheir companies and industries. Executives surveyed report that IoT will be a “driver of the digital transformation that will enable businesses to reinvent products, services, internal operations and business models,” and that “following an IoT technology path is crucial to their long-term success.” 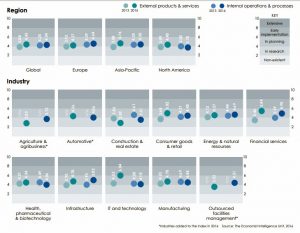 One-fifth of the survey respondents have already seen a major impact from IoT on their industries, and an additional 32% are convinced that significant impacts are just around the corner.

Frank Wammes, CTO, Application Services – Continental Europe at Capgemini, says the real question is monetizing outcome. He postulates that if the ability exists to place sensors on products and have the capability to know from customers when they bought a product, how it was purchased and consumed, then it presents an opportunity for the business to extend the experience, or potentially influence the replacement of those kind of products.

“That's really where the true value is. It extends the focus on the customer not only from a 25% capturing of the interaction with the customers that we had through CRM, but actually to get a 100% focus on how they actually start using the products,” he postulated.

Wammes noted that some clients have already embedded sensors on their machines. “The question is what do they do with the data of that machine? Is it only to track the performance of that single data? Can the data that's coming from a machine which sensors say something on what will happen in the rest of the supply chain?”

He cites the example of a fluctuation in the production of a machine spotted using analytics, and determining the impact on delivery time at the end of the supply chain. By identifying such trends and notifying customers on the potential impact to delivery, the manufacturer is able to create new experiences that previously was never possible with conventional technology and processes.

“It is in the capturing the data from the sensors over the supply chain optimizing it and then using that to really create new experiences and optimizing the process that's where the true value of the Internet of Things really is all about,” concludes Wammes.

The proliferation of interconnected IoT devices offers exciting new opportunities to develop payment applications – in the home, on the move and across a wide range of retail, automotive and industrial environments. But a lack of standardization, slow adoption in the financial sector, and a complex technology ecosystem presents considerable challenges that threaten to stifle innovation and market evolution. SPA investigates.