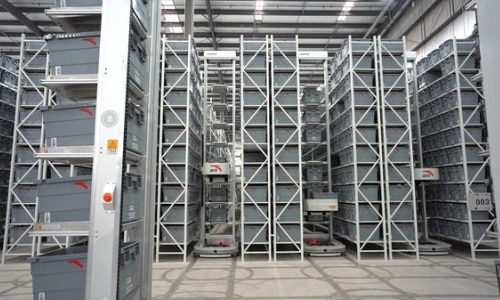 HAI ROBOTICS' ACR robots in operation at an Anta warehouse.

Chinese sportswear brand Anta and HAI Robotics are embarking on their third robot deployment in less than a year at  the latter’s new warehouse in Foshan, Guangdong Province.

Set to open in April, the new 9-metre-high facility in South China will have a higher storage density with a daily throughput expected to reach 128,000 units. It will be using HAI Robotics' ACR (autonomous case-handling robotics) system to help handle growing fulfilment workload.

"We see HAI ROBOTICS as an important long-term partner, as we have shared ambition in smart warehousing," Chen Jiancong, general manager of logistics of Anta Group.

The storage density of the 5.7-meter-high warehouse increased significantly to offer up to 27,600 locations, handling up to 80,000 units in outbound orders per day. The warehouse, which was previously stretched tight to handle its tens of thousands of SKUs at low picking accuracy, is now feeding the needs from 1,200 brick-and-mortal stores with a weekly outbound volume of 60,000 pieces.

The tremendous efficiency improvement prompted Anta into a second warehouse automation project with HAI ROBOTICS only three months later, with a larger robot fleet deployed at its 3,500-square-meter warehouse in Jinjiang.

With the redesign of 11-layer shelves inside the 5.7-meter-high warehouse, the project provides around 20,000 storage locations. The warehouse reached a daily outbound capacity of 200,000 pieces with the use of HAIPORT-powered Workstation, an automatic loading and unloading machine.

"Together we will keep innovating to address more challenging scenarios for the footwear and apparel warehousing sector and bring more added value to our customers," said Richie Chen, founder and CEO, HAI Robotics.

Named a global AI unicorn by Hurun Research Institute last year, the company – which specialises in robotics- and AI-based warehouse solutions – currently has a number of ongoing projects with top footwear and apparel brands.

Founded in 2016 with headquarters in Shenzhen, China, HAI ROBOTICS has set up six subsidiaries in Hong Kong SAR, Japan, Singapore, the United States, United Kingdom and the Netherlands, serving customers from more than 30 countries and regions.

With more than 1,300 team members, the company has acquired over 600 global patents for core intellectual properties involving positioning, robot control, and warehouse management.